Definition: the blowing of steam through piping to remove debris from the pipe, cleaning steam lines to a steam turbine, cleaning plant expansion lines, or new installs. As the definition says, to steam blow a pipe requires steam to blow through the pipe. This pipe can be attached to a boiler or heat recover steam generator, and the other end of the pipe can be attached to a steam turbine.

Steamblows can be done with either water injection into the temporary piping or dry silencers which require no water injection. The circumstances for utilizing each are as follows:

Dry Silencers are utilized where no personnel will come in contact with the temporary piping, the temporary piing is at full exit temperature, this will require the craft people to be quarantined from the area where the steam piping will be routed.

Water injection type silencers do require injection of water down stream of the permanent piping tie-in, as a result the temporary piping temperature is reduced dramatically. This is the safest application for congested work areas that will contain craft personnel.

As can be readily seen this is very loud and sometimes dangerous to perform in confined areas such as where many steam turbines are being placed. Even in the wide open spaces the noise is considerably above given OSHA standards. Additionally, boiler/heat recovery steam generator manufactures have started putting limits on the rate of rise and fall of temperature in the steam drum for these blow which affect their overall performance.

To remedy this obvious noise and danger level, other methods have been developed to abate the sound, and danger. Cogen Cleaning Technology, Inc. has been at the forefront of such methods and has their own method of either a high pressure impulse steam blow or another method called a low pressure continuous steam blow.

CCTs impulse steam blow uses the latest in fast opening hydraulic actuated valves that are hard surface coated to withstand debris many repetitions of opening and closing and complete the impulse blow. As an aid to noise control, CCT utilizes temporary piping from the temporary steam turbine exit with water injection along the temporary pipe to help quench and reduce the volume of steam before it reaches the steam exhauster/silencer. This helps reduce the noise to a level more acceptable to the OSHA standard.

Regardless of the method, CCT is fully qualified and ready to handle any requirement for the steam blow of your choice. 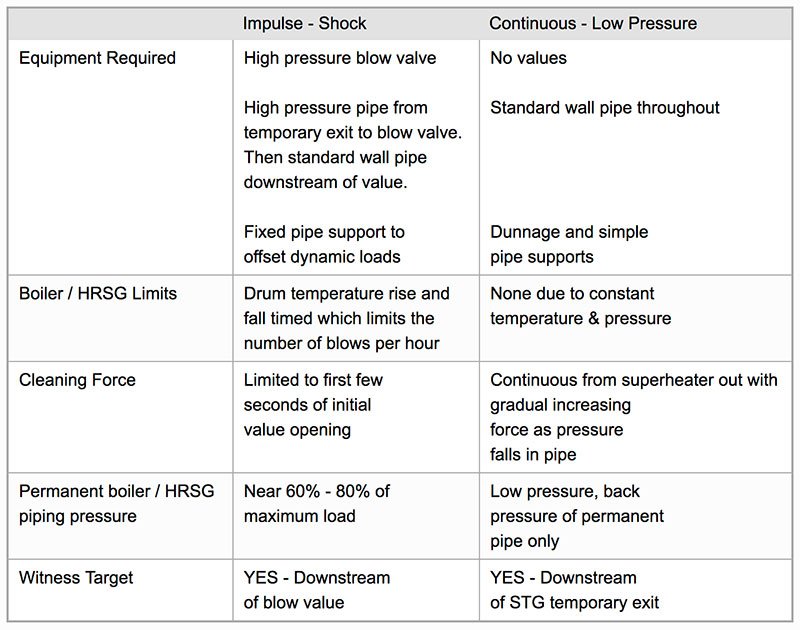 Our engineered methods have proven to make the power generation equipment start-up process more efficient, substantially reducing the critical path worries associated with today’s tight construction and commissioning schedules. The CCT approach is to help our customers pre-plan for the upcoming activities in order to minimize delays and keep the project on schedule.

Cogen is one of the top 50 contractors we have ever worked with in terms of excellence of service and value , which is why we formally recognized thier efforts as a top contractor this year for our power projects.

Want to Talk Project Specifics or Get a Quote? Contact Cogen